How Do Canadians Rate the Health Care System? Our 3rd Webinar 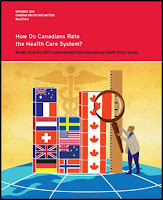 On February 14th, we held our third webinar, What Can We Learn From Top Performing Countries? It expanded on our November 2011 bulletin, How Do Canadians Rate the Health Care System? based on the 2010 Commonwealth Fund International Health Policy Survey. In the bulletin, we found that citizens of certain European countries feel they have the edge in particular areas of health care.
In our webinar, we discussed those areas and what Canada and other countries can learn. We invited three guest panelists - from the United Kingdom, Nicholas Mays, Professor of Health Policy in the Department of Health Services Research & Policy at the London School of Hygiene and Tropical Medicine in London; from the Netherlands, Dr. Jako Burgers at the University Medical Centre, St. Radboud Scientific Institute for Quality of Healthcare, Nijmegen; from Switzerland, Dr. Monika Diebold, Head of Obsan, the Swiss Health Observatory, at the Swiss Federal Statistical Office, Neuchâtel.

If you missed the webinar, you can download or playback by clicking  HERE. We apologise that it commences just after the start of panelist Nicholas May's presentation.You can download the complete PowerPoint presentations HERE. Finally, here are the questions webinar attendees asked our panelists...
You may have your own questions or comments about either the bulletin or what you heard in our webinar. Please feel free to post them in the comments section below. 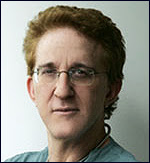 Dr. Brian Goldman is a veteran ER physician and one of Canada's most trusted medical broadcasters. He has been an award-winning medical reporter for CBC Television's The Health Show and The National. He's also known across Canada as the host of CBC Radio One's "White Coat, Black Art."
When was just starting out as an ER physician, I can remember the day a teenager was brought by paramedics to the hospital.  A passerby found him sprawled beside his bicycle.  He was semiconscious and had telltale swelling and bruising on one side of his head.  Right before my eyes, he became deeply comatose and developed profound weakness on the side of his body opposite to that of the swelling in his scalp.
I knew my patient was in deep trouble.  Fortunately, the paramedics remained at my patient’s bedside as I worked frantically to stabilize him.  I transferred him to a pediatric hospital, and the paramedics drove at speeds above 100 km per hour on city streets to get him there in time.
The good news is that neurosurgeons were able to operated to remove an extradural hematoma, a collection of blood inside my patient’s skull.  He made a complete recovery.  Without timely transportation and skilled surgeons, my patient would surely have died.
Other patients aren’t quite so lucky.  The main reason is that far too many Canadians venture onto the roads without wearing a bicycle helmet.  According to the Canadian Community Health Survey, just 4.1 million or 36% of the more than 11.4 million Canadians age 12 and older who ride a bicycle wear a proper helmet at all times.
That is why I support the use of health indicators that will measure the effectiveness of laws and regulations that require cyclists to wear helmets.  Injuries are the leading cause of death and disability for Canadian children and youth.  Major causes of injury include bicycle and motor vehicle crashes.  When you see the impact of trauma on the lives of patients and their families, you understand that the only 100% effective way to deal with injuries is to prevent them.
Although helmets can reduce the risk of head injury by 85%, safety campaigns are not enough.  Looking at bicycle helmet laws is a great place to begin, since mandatory bicycle helmet laws have been shown to increase the use of helmets and have reduced head injuries.  Several provinces have mandated the use of bicycle helmets.  Some require the use of helmets at all ages, while others require their use in kids under the age of 18 only.  By comparing injury rate in these different jurisdictions, we can monitor the effectiveness of bicycle helmet laws.
Other health indicators from CIHI and Statistics Canada that have a bearing on safety include mortality rates, hospitalizations, and the percentage of cyclists who wear a helmet.
By focusing on bicycle helmets and laws requiring them, we’re making things safer for Canadians.  And, we’re reducing the carnage in our emergency departments.