Not enough specialists, not enough time 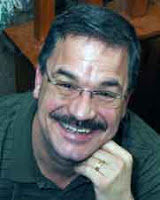 Frank Austin is a stroke survivor who is active in the Kitchener-Waterloo area with his own stroke website and works as a peer counsellor for other stroke victims. His big frustration with the health care system is the lack of specialists with enough time to provide adequate service. He suffers from aphasia, but cannot access sufficient speech therapy.

Affordability: Since a stroke is a sudden illness, the loss of one income in a home with a small child is very significant.   In my situation, I was about to start a new job on the Monday after my stroke, so I did not have any long term/short term disability coverage through an employer. I had to wait for therapy and was not able to afford private speech therapy while waiting for speech therapy at the hospital.
Timeliness of Care: I was in the hospital for a week after my stroke.  I was discharged from the hospital with a prescription for cholesterol medication and was told to make an appointment with my family doctor.  The neurologist in the hospital was an on-call doctor and he said he was not going to be my neurologist.   It would have been a lot easier and far less stressful if we had been given a referral to a neurologist after staying in the hospital for a week, or at least an appointment with the stroke clinic upon leaving the hospital.  While my doctor kept monitoring my blood pressure and ordering blood tests, my wife worked to get a referral to a neurologist ASAP.  It was not until I had finally started my speech therapy at the hospital that I found the name of a neurologist for my wife to call at the stroke clinic.    Once I was at home, I was left alone with knowledge of very few resources.  My wife contacted one organization that we were referred to, and they did not have my file or information.  My wife had a very difficult time trying to find assistance or answers to my many questions, as our life was suddenly turned upside down.  She contacted several private speech therapists who were very helpful at explaining what happened to my speech etc.,  but  charged  more than we could afford.   One therapist told her to call the organization back and tell them that “your husband needs and is entitled to speech therapy now.” She said “Don’t take no for an answer. The longer he goes without speech therapy the worse it can be.”
Coordination of Care – When my wife called the stroke clinic, they had been in contact with my family doctor’s office. However, the receptionist at the stroke clinic mentioned they had to request copies of the test results from the hospital several times and she was getting frustrated, almost to the point of giving up since they took so long.  The neurologist was informed, he did have the test results once we finally had an appointment with him, i.e., approximately six months after my stroke.
Patient Engagement:  The neurologist was exceptional. He completed a full examination, he asked a lot of questions regarding what happened the night the stroke occurred and my previous health history.  He took as much time as we needed to ask questions, and since I have aphasia, he was very patient with me.  He took time to explain the results of all the tests.  He also reviewed all the medications I was taking and increased the dose of the cholesterol pill.   He was concerned since I am young and he wanted to prevent another stroke if at all possible.   He also ordered another test right away.
Self Management – I attended “Living with a Stroke” through the Grand River Hospital. This was very helpful and allowed me to meet other survivors.   I also attended “Stroke Recovery Canada” meetings to meet other survivors and as part of my post-stroke therapy.
I was discharged from speech therapy after approximately nine months, but was in no way in a place to be finished.   I was sent home with no other resources, other than private speech therapy and, unfortunately, we were not able to afford it.   That was why I was determined to find help for myself and others sitting at home without the continued therapy we require to be self-sufficient.   That was why I created a website – www.kwstrokesurvivor.com – and worked hard to start an aphasia conversation therapy group for survivors – Expressive Café.